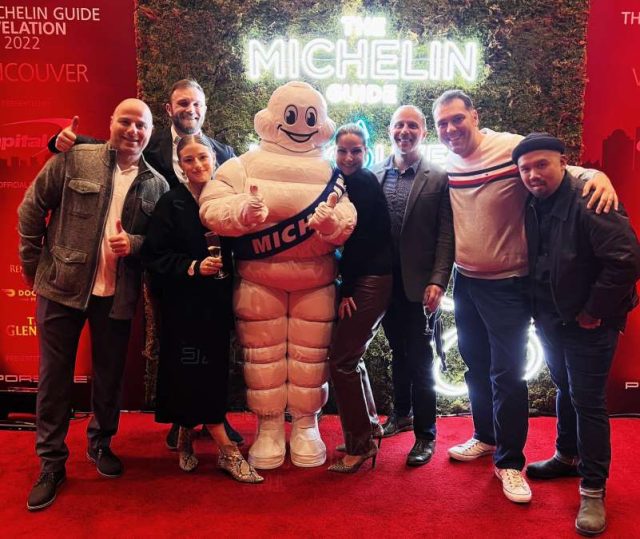 Kitchen Table Restaurants is thrilled to announce that three of its beloved Vancouver restaurants have been named as Recommended in the new MICHELIN® Guide Vancouver. The Guide’s debut selection was announced during a ceremony at the Vancouver Convention Centre last night, and Ask For Luigi, Bacaro, and Carlino were all named in Michelin’s category of recommended restaurants.

Said the MICHELIN® Guide: ”No one feeds you quite like Ask For Luigi.” On Bacaro, “The address may be Vancouver, but this spot is decidedly Venetian with its menu leaning towards the art of cicchetti, or small bites enjoyed on the go while quaffing a glass of wine.” Calling Carlino a “verdant sanctuary”, the Guide went on to state: “The menu displays a typically Italian devotion to simplicity, celebrating seasonal produce from local farms.” First published in France at the turn of the 20th century to encourage tire sales by giving practical advice to French motorists, The MICHELIN® Guide offers a selection of world-class restaurants and remains a reliable companion for any traveler seeking great meals in destinations around the world. Using the methodology established when first published, the Guide’s anonymous inspectors award One, Two or Three Michelin Stars for unparalleled cuisine. Beyond the stars, the guide also includes restaurants around the city that are notable.

“We’ve watched and been a part of the transformation and evolution of Vancouver’s restaurant landscape over the past 15 years and observing the excellence of our peers has inspired us tremendously. It’s incredible to finally witness the collective success become recognized on a global scale by the MICHELIN® Guide,” said Jennifer Rossi, Partner at Kitchen Table Restaurants. “It’s been a long road to get here but this is just the beginning. My guess is that we will see Vancouver up it’s game in the coming years. This was just the shot in the arm we needed to refocus and elevate after a very challenging past couple of years.”

“MICHELIN® coming to Vancouver, and Canada in general, is wonderful for our food scene and restaurant community. A lot of up-and-coming cooks and chefs work at Michelin-starred restaurants abroad in order to gain experience — perhaps this will keep a lot of our talent at home,” Chef Scott Korzak from Bacaro shares. “Bacaro’s inclusion is a tribute to our team past and present. I am grateful for our team as nothing could have been accomplished without the continuous effort we all put in.”

It’s the most wonderful time for a beer: BC craft breweries release 100+ new beers this winter

4 Tips for Moving From an Apartment to a New Home