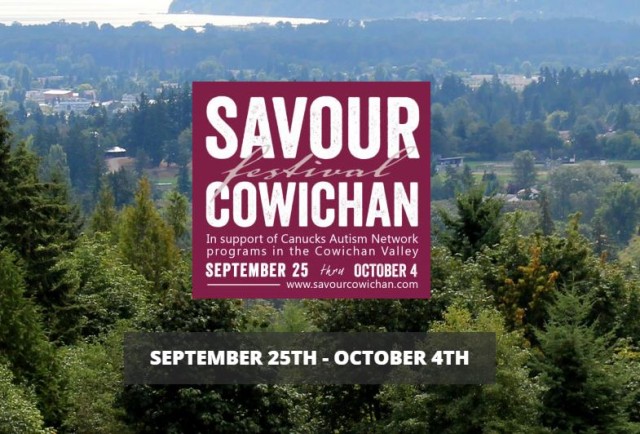 COWICHAN VALLEY, BC–– Situated an hour’s drive from Victoria, British Columbia on southern Vancouver Island are the verdant slopes of the Cowichan Valley. Long known for its scenic beauty and diverse arts communities, the area is blessed with the warmest average year-round temperatures in the nation, thus its status as Canada’s only “Maritime Mediterranean climatic zone”. It’s no wonder that this fertile land, which hugs the Salish Sea, is gaining renown for its number of wineries, many of which claim prestigious international awards. Consider too, the region’s robust culinary industry and you have a thriving “gastro-conomy”, which draws national attention each year at the local food and wine festival.

Called the Savour Cowichan Festival, the event celebrates and showcases the Cowichan Valley’s remarkable cornucopia of locally produced food and drink. For ten days in late September, 40 artisanal food and beverage producers host the world at more than 60 epicurean events across the region. Throughout the Festival, guests can tour on-site operations, sample premium local products and meet the experts who passionately explain their craft, including master winemakers, brewmasters and sommeliers. About half of the events take place in the area’s finest restaurants where guests can experience the best of Cowichan at tasting events, cooking classes, winemakers’ dinners and demonstrations by top chefs.

This year’s Festival takes place from September 25 to October 4 and kicks off with a tasting event held on a barge in nearby Mill Bay. The Festival reaches a high note on October 3 with a star-studded long-table dinner benefitting the Canucks Autism Network. www.savourcowichan.com