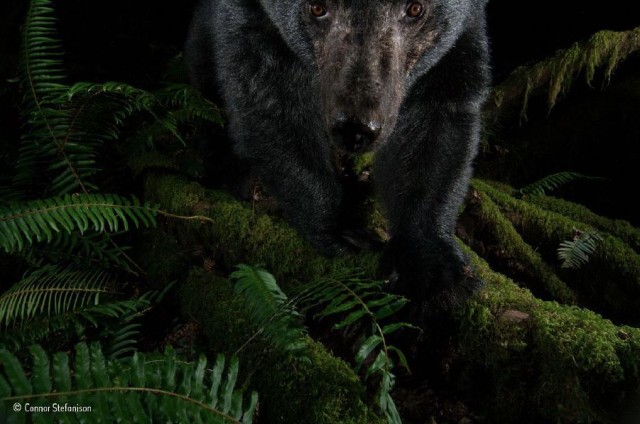 Victoria, BC – British Columbia photographer Connor Stefanison returns to the Royal BC Museum as a winner, as Wildlife Photographer of the Year 2015 opens for its only Western Canadian viewing on Friday, Dec. 4.

Presented by the Natural History Museum, London, and now in its 51st year, Wildlife Photographer of the Year 2015 features 100 stunning winning images in huge, backlit displays, selected from a field of 42,000 international entries in 20 categories. 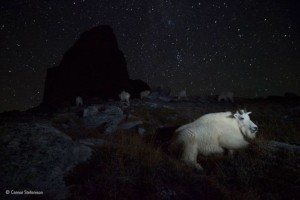 Stefanison’s Rising Star Portfolio Award-winning six-image entry includes Raven strut, a pensive portrait of a raven walking through the snow, and Night of the mountain goats, a dramatic star-filled image taken by Stefanison after camping on a rocky mountain ledge for three days and nights. Stefanison, a graduate of Simon Fraser University, won the award for the first time in 2013. 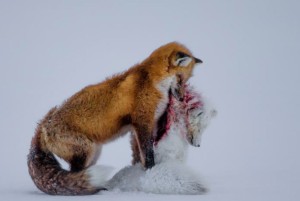 Dr. Don Gutoski, an emergency room physician from London, ON, was named the overall winner of Wildlife Photographer of the Year 2015 for his Tale of two foxes, a beautiful and haunting portrait of the struggle for life in the subarctic climes of Wapusk National Park in Cape Churchill, MB. 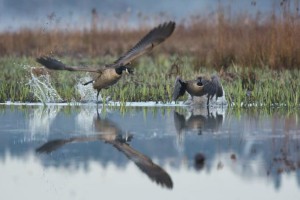 Ten year old Albertan Josiah Launstein is a finalist in the 10 Years and under category for two photographs: Goose attack, taken at Burnaby Lake in BC, and Snowy scene, a photo of a snowy owl taken in Calgary, AB. Launstein has been a photographer since the age of seven. This is his first time as a Finalist for Wildlife Photographer of the Year.

“We are thrilled that this year, once again, Connor Stefanison has been recognized by Wildlife Photographer of the Year,” said Prof. Jack Lohman, Royal BC Museum CEO. “Connor’s work, as well as the remarkable photographs by fellow Canadians Don Gutoski and Josiah Launstein, offer a close-up view our natural world, and compliment perfectly the collection and research we do here at the Royal BC Museum.”

Members of the public are also invited to take part in voting for the 2015 People’s Choice Award.  The Wildlife Photographer of the Year jury has chosen 25 of the best images from the 2015 competition shortlist as nominees in this category. Those interested are invited to view the nominees and vote for their favourite at http://www.nhm.ac.uk/visit/wpy/community/peoples-choice/2015/index.html.

Voting closes on Jan. 5, 2016. The winning image will be revealed on Jan. 11, 2016.  Participants are invited to share their selection with @NHM_WPY on Twitter using the hashtag #MyWPY to be eligible to win a copy of Portfolio 25, published by the Natural History Museum, London.

Wildlife Photographer of the Year receives entries from professionals, gifted amateurs and young photographers alike. The international judging panel includes some of the world’s most respected nature photographers and wildlife experts.

Each photograph on display is described by the photographer, alongside technical details including camera, lens, aperture and exposure.

About the Royal BC Museum

The Royal BC Museum explores the province’s human history and natural history, advances new knowledge and understanding of BC, and provides a dynamic forum for discussion and a place for reflection. The museum and archives celebrate culture and history, telling the stories of BC in ways that enlighten, stimulate and inspire. Looking to the future, the Royal BC Museum will be a refreshed, modern museum, extending its reach far beyond Victoria as a world-class cultural venue and repository of digital treasures.

If you have to entertain yourself at home, you may as well do it right