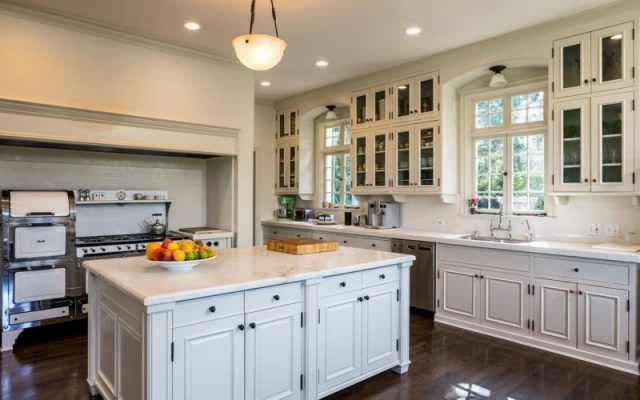 After first appearing on the market in 2008 for $26.25 million and later reduced to $18.95 million with no takers, the fabled mansion of legendary filmmaker Cecil B. DeMille was taken off the market in 2009.  It reappeared this year with a new price tag of $24.95 million – just scooped up by Angelina Jolie.

Never more than two steps from the next Hollywood gossip-sheet headline, the activities of the Brangelina duo of Brad Pitt and Angelina Jolie have been gold to columnists for the last 12 years after they became involved while filming Mr. & Mrs. Smith in 2005. When Jolie filed for divorce last year only two years after the couple finally married, details of the divorce ran rampant in headlines around the world.

Whether prompted by personal desire to keep the children near their father or the private divorce judge’s decision, Jolie has opted to stay in Hollywood instead of moving to London as she originally planned. Similar to Taylor Swift’s 2015 purchase of Old Hollywood movie producer Samuel Goldwyn’s Beverly Hills home, Angelina has just purchased Cecil B. DeMille’s Los Angeles mansion.  With 11,000 square feet on 2.1 acres, there is plenty of room for her children to play and swim in the bright California sunshine close enough to their father to make visits easy.

DeMille, who produced and directed dozens of movies including The Ten Commandments, The Greatest Show on Earth and Exodus, acquired his mansion in 1916 on a street now named after him.  Built on the largest and highest lot in Laughlin Park, the home has panoramic views that extend from the Griffith Observatory to the Pacific Ocean.  Known for his signature directing style, DeMille lived on the estate until his death in 1959.  He also bought a house next door where Charlie Chaplin had lived and DeMille used as his studio office.

Perched high above lawns, mature trees and flower gardens, the six-bedroom, ten-bath  Beaux Arts-style mansion has a curved stairway in the foyer, formal living room with fireplace, mahogany-panelled dining room, library with custom floor-to-ceiling shelving, updated white kitchen with marble counters and restored vintage range.  There are multiple venues for entertaining both inside and on outdoor terraces with stone steps leading to a newer pool in the style of the grand Hollywood pools of yesteryear.

The estate is located in the Los Feliz area of Los Angeles in the gated Laughlin Park, one of the city’s earliest celebrity neighborhoods preferred by stars such as W.C. Fields, Charlie Chaplin and DeMille.  Today’s residents include Natalie Portman, Kristen Stewart and recent Oscar-winner Casey Affleck. Brett Lawyer, Branden Williams and Rayni Williams of Hilton & Hyland held the listing.

The fabled estate of film director Cecil B. DeMille formerly for sale at $24.95 million, has been purchased by actress Angelina Jolie for near the asking price.