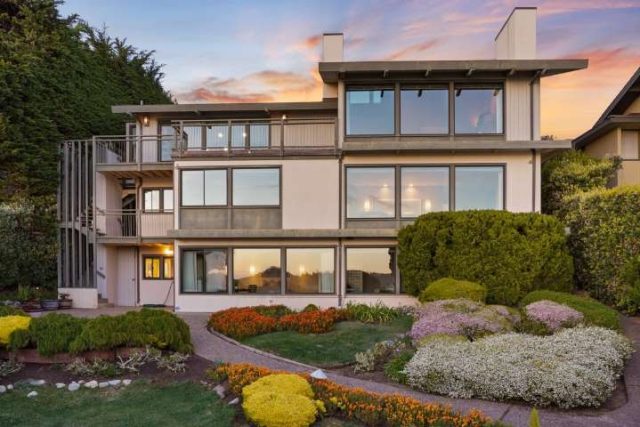 Betty “The Queen of TV White, with over 80 years in the industry, was the first woman to write, produce and act in a sitcom, Life With Elizabeth.  In her lifetime she has won eight Emmys, three Screen Actors’ Guild awards, a Grammy and three American Comedy Awards.  Most recently known for her bubble-headed character Rose Nylund on The Golden Girls, and hosting Saturday Night Live, White died on New Year’s Eve at the age of 99.  Her Carmel-by-the-Sea beach house, which she built with her husband, Allen Ludden, in 1978, is listed at $7.95 million. Allan was also a television star hosting the popular TV game show, Password, which is where they met. He died in 1981.

Overlooking the Pacific Ocean, Point Lobos Nature Reserve, Ribera Beach and Monastery Beach, the 3,621-square-foot, three-story home has walls of glass and earthy building materials such as the stone fireplace and light wood walls and ceilings that display the couple’s love of nature, while still keeping it open, light and airy.  There are four bedrooms and four-and-a-half baths.  In addition to the romantic views, the primary suite also has a fireplace while the ensuite bath has a vanity that was designed by Betty.  The versatile dining room can be used informally while open to the kitchen or closed off with the only view being the deck and ocean.

As beautiful as the home’s interior is, the exterior is the big star. Views from the deck include manicured landscaping with grass, shrubs and flowerbeds.  Just beyond are craggy shoreline rocks with a glimpse of the white-sand beach to the left, which runs the length of the property below the cliff.  In addition to ocean views, there is also a forested hillside rising above the ocean. To top it all off, the oceanside gets colorful evening sunsets.

Betty’s infectious smile and chirpy personality were endearing to her public, but her heavy work schedule could be draining at times.  The beach house, with its simplicity and focus on nature, was the perfect place for Betty and Allen to escape the public eye and decompress.  After Allen’s death, Betty expressed no desire to remarry, since in her view, she had already had the best.  Betty never had children of her own but enjoyed her three stepchildren from Ludden’s former marriage.

Take in the oceanside at the estate “refuge by the sea” located in Oak Bay, BC