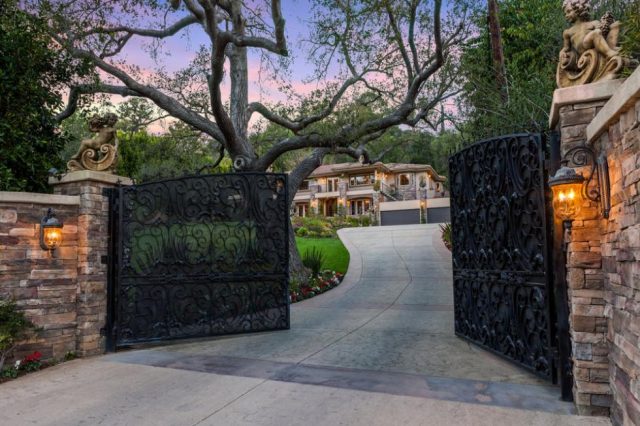 A Southern California home that has been seen by more TV viewers than just about any other home in recent years is for sale. Modeled after an Italian castle, Palazzo Dei Sogni has served as the fictitious home for several television shows including ten seasons as the home of the Kardashian-Jenner family.

Palazzo Dei Sogni, which translates to Palace of Dreams, has been the vision of set designers for the HBO shows True Blood, Entourage and Rome, as well as for E!’s Keeping Up with the Kardashians, in which the front facade and grounds were used from season four of the program as the Kardashian-Jenner family home. Located in Studio City in the Hollywood Hills, it has played its own starring role for up to two million viewers a week checking all the boxes for location, privacy and over-the-top opulence.

Built in 1983 and extensively remodeled in 2005, the 7,800-square-foot, seven-bedroom, eight-bath, Italianate-style residence is sited on almost an acre of meticulously kept grounds in the Fryman Estates community – neighbors to George Clooney, Miley Cyrus and Bruno Mars. Its design, inspired by the Medici Castle in Florence, is flush with ornate woodwork, Venetian plastered walls, ceiling and wall murals by artist Giorgio Tuscani, 17th-century chandeliers in almost every room, sconces imported from the Paris Opera House and a centuries-old stone fountain. Public areas of the mansion include a two-story foyer, formal living and dining, paneled den, a screening room with 12-foot screen, a billiards room and 2,000-bottle wine cellar. Both the indoor and outdoor kitchens include Viking appliances and casual dining areas both inside and on one of the many terraces. The very private gated and hedged grounds include rolling lawns, mature landscaping, a salt water swimming pool with waterfall and parking for ten cars.

Palazzo Dei Sogni, the palatial residence chosen by set designers to star as the backdrop for many hit television programs, is now for sale asking $8.995 million. Robert E. Howell of Keller Williams Beverly Hills is the listing agent.

Rogers and Jays Care Foundation Step Up to the Plate for Food Banks Canada, with 8 Million Meals at Rogers Centre