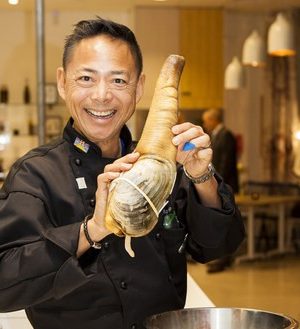 An award winning list of local, national and international celebrity chefs has now been announced for the 12th annual BC Seafood Festival, a 10-day celebration in the beautiful Comox Valley on Vancouver Island, B.C. from Friday, June 8 to Sunday, June 17, 2018. Tickets to select public events will go on sale starting at 9:00am PT on Friday, April 13th.

This year the 2018 event is unveiling the next generation of the festival by extending the highly anticipated BC Seafood Festival Signature Weekend to three-days featuring new events and celebrations including celebrity chef demonstrations, award-winning shellfish and seafood tastings, interactive & educational displays, and competitions including the famous Fanny Bay Oyster Shucking Competition and the OceanWise™ Chowder Challenge. Guests and visitors may purchase a Signature Weekend Day passes to enjoy some of these weekend highlights:

Notably, an impressive group of celebrity chefs, and for the first time ever, a lineup of international culinary celebrities, are being featured that weekend and throughout the Festival.

The growing list of regional and domestic chefs currently includes:

“This year’s BC Seafood Festival promises to be the best yet for presenting a stellar line-up of famed local, domestic and international chefs, while also showcasing our renowned sustainable seafood from our pristine West Coast waters. We look forward to welcoming visitors and locals to the festival and events,” states Chef Nathan Fong, Chef Producer for the Festival.

Stay tuned for more tantalizing events to be announced in the coming days. Fun-filled dinners, Canada’s largest happy hour oyster bar, a seafood brunch cookout, and more will make this year’s BC Seafood Festival the best in its 12 year history!

For more information and tickets: Early-Bird BC Seafood Festival Signature Weekend pass ticket sales open on April 13th with more tickets being released soon for these and other Satellite Festival events at BCSeafoodFestival.com  Sign up to receive updates about ticket and specials.

For more information about the Comox Valley, accommodation, tickets and the BC Seafood Festival go to BCSeafoodFestival.com or call the Vancouver Island Visitors Center 1-855-400-2882.

Join the conversation at #BCSeafoodFest.