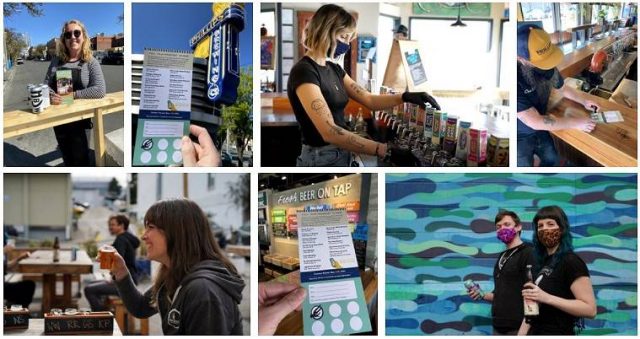 The BC Ale Trail has launched The Victoria Ale Trail Passport, a new program encouraging locals to visit the region’s incredible breweries and treat themselves to homegrown craft beer. The recent restrictions closing indoor dining make it even more difficult for small businesses to make ends meet so local support like this makes a big difference.

From May 1 to 31, Greater Victoria residents can pick up a Victoria Ale Trail passport from their favourite craft brewery and embark on a local tasting tour, collecting stamps along the way. After earning six stamps, beer fans can drop their completed ballot off at a participating brewery to enter to win a beer-themed prize package. Multiple entries are allowed.

Beer fans can win prizes such as an overnight Staycation at Spinnakers Guesthouses, two free passes for the Pedaler’s Hoppy Hour Bike Tour, multiple brewery prize packages featuring merchandise and gift cards, and BC Ale Trail promotional swag. The prize draw will take place during the first week of June after all of the completed passports have been collected.

Victoria has long been hailed as the cradle of the craft beer revolution, home to Canada’s first brewpub and some of BC’s most popular breweries. The 14 breweries that comprise the Victoria Ale Trail – and the locations where imbibers can pick up their passports – include:

“It’s great to be working with our fellow breweries in Victoria,” said David Nicholls, General Manager of Vancouver Island Brewing. “It’s time to get outdoors and taste the new delicious beers that our local breweries are making.”

“The Victoria Ale Trail passport is the perfect opportunity to support your neighbourhood brewery while staying local,” said Joe Wiebe, Content Manager at the BC Ale Trail. “Most of the breweries and brewpubs have breezy patios where you can enjoy a beer in the sunshine, or you can pick up packaged beer to go. Either way, you’ll earn a stamp and feel good about investing your dollars back into our community.”

Cross-Canada cycle tour will kick off in Victoria, May 15

Pigs OUT! Escape the Pen in Oliver Osoyoos Wine Country