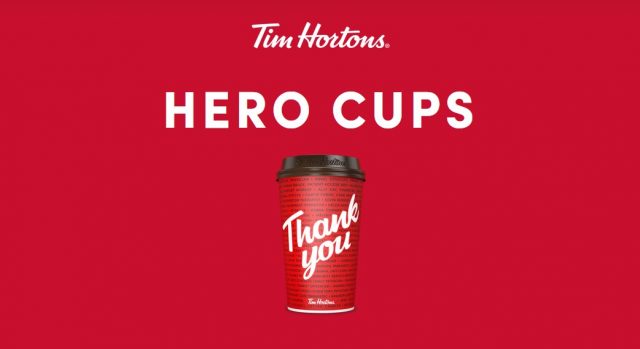 Cheyenne Schulz has worked with vulnerable populations in Mission, B.C., helping to provide food, hygiene and shelter necessities. She is also a longtime Tim Hortons team member. Rhonda Mathison is a nurse that provides care for the Fort Nelson First Nation community. Dr. Eugene Wong, originally from Calgary and currently based in Red Lake, Ont., has flown in and out of some of the most remote parts of the country to help the sick in underserved communities. Truck driver Shawna Gray of Winnipeg has been away from home for up to two weeks at a time so she could do her part to keep grocery shelves stocked. And Dale Langille renewed his nursing license so he could help provide medical care in Laval, Que. They are just a few of the thousands of everyday Canadian heroes who are being honoured on new limited-edition Tim Hortons Hero Cups, which became available at participating restaurants across the country starting this week.

There are 100 different designs of hot beverage cups featuring large “Thank You” and “Merci” messages in place of the Tim Hortons logo, along with the names and professions of up to 100 heroes wrapping around the cup.

In June, Tim Hortons asked Canadians to nominate their heroes of the pandemic and a flood of submissions quickly poured in. The thousands of heroes whose names appear on cups are a diverse mix of workers: they include health-care professionals, first responders, retail staff, government workers, public transit drivers, social workers, funeral home staff and many others who have made important contributions that helped keep the country running during these difficult times.

“There are so many Canadians who have stepped up in incredible ways since the beginning of the pandemic,” says Hope Bagozzi, Chief Marketing Officer of Tim Hortons. “With our Hero Cups, we can all take a moment as we’re having a coffee to read through the names of some unsung heroes of the last few months. They’ve been the backbone of our communities during these extremely challenging times and this is another way of saying thank you for everything they’ve done. And I also want to mention all the hardworking Tim Hortons team members — we owe them a huge thanks for everything they do.”

Since the beginning of March, Tim Hortons and its 1,500 restaurant owners across Canada have also sought out opportunities to thank frontline and other essential workers by donating over 1.6 million free cups of coffee and baked goods, by making contributions to local food banks, and distributing free Tims gift cards.

Visit https://www.timhortons.ca/herocups to learn more about some of the Canadians who have their names on Hero Cups:

Enjoy meal prep and entertaining with The Decent Butcher Block