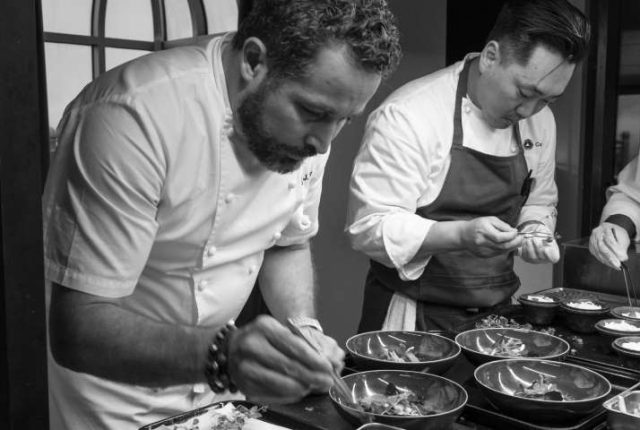 For two nights only, the chefs will join forces on a seven-course tasting menu that fuses SAGA’s cuisine – which thoughtfully blends inspiration from global travels with the diversity of New York City – with Laguna’s innovative and creative approach to the botany of the Pacific Northwest. Chef Kent and his team will profile three of his creations from the SAGA kitchen while Chef Laguna will feature three original Botanist dishes, followed by dessert by Botanist’s Pastry Chef, Kate Siegel. Accompanying Kent on the trip, Bar Director Harrison Ginsberg of his Overstory cocktail bar will collaborate with Botanist Bar Head Bartender, Jeff Savage to develop a feature cocktail menu to complement the evening. The highly decorated cocktail connoisseurs will also team up those nights to offer a more cocktail-forward experience at Botanist Bar, comprising of four courses and four cocktails.

Chef Kent is a much-heralded culinarian, having worked in top kitchens in New York City including Eleven Madison Park (EMP), and The NoMad. During his time at EMP as Chef de Cuisine, the restaurant received a coveted four-star rating from The New York Times, three Michelin stars, and the top spot on the San Pellegrino list of the World’s 50 Best Restaurants. He then joined sister restaurant, The NoMad, as Executive Chef. In 2017 he left The NoMad to pursue his first solo project, an ambitious pair of restaurants, Crown Shy and SAGA, as well as a cocktail bar, Overstory, in the landmark Art Deco building at 70 Pine Street in New York’s Financial District.

“We are honored to welcome James Kent and his team to Fairmont Pacific Rim,” says Jason Cisneros, Director of Food & Beverage at Fairmont Pacific Rim. “The success of Katana Kitten in March demonstrated that the city has an appetite for memorable and elevated dining experiences. I have no doubt that this will prove to be one of the highlights of the summer for local culinary enthusiasts”

The tasting menu will be available for dinner service on August 3 and 4 for $285.00 CAD per person plus taxes and gratuity. Reservations are now open and can be made online. The menu in its entirety will be released this month, and dietary preferences can be accommodated to cater to all guests.

This is the second collaboration of the year for the Fairmont Pacific Rim; in March the hotel hosted Katana Kitten, recently named #4 on North America’s 50Best Bars. In September, Botanist will travel to New York for a return collaboration, with both SAGA and Overstory.