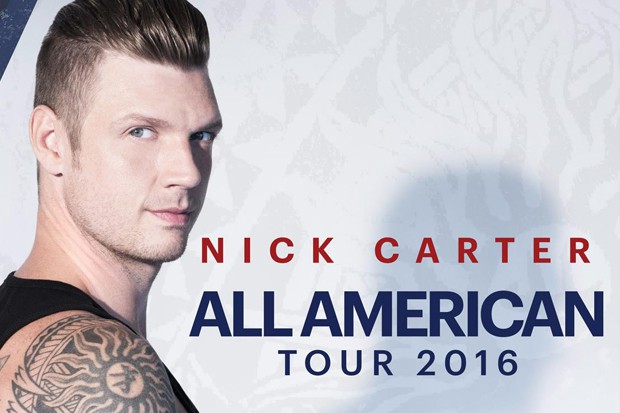 Announced today, international pop sensation and 22-year entertainment veteran,  Nick Carter, will embark on a solo Canadian tour in support of his new album  All American . Tickets for the tour, which kicks off in North Bay on November 8, go on sale today via www.nickcarter.net. The All American  tour will have fans on their feet dancing all night long to an array of songs that fuse pop and rock, including singles “I Will Wait”, and “Get Over Me” featuring Canadian star Avril Lavigne.

Carter’s latest solo venture is part of an already illustrious catalogue including his debut album Now or Never, which was certified Gold in the U.S., Canada and Japan; sophomore album I’m Taking Off; and collaborative album with Jordan Knight (New Kids on the Block) Nick & Knight, which debuted at #24 on the US Billboard 200. Carter has also been in-studio working on the Backstreet Boys’ ninth  album.

“Over the years Canada has become a second home to the Backstreet Boys and me,” said Nick Carter. “I’m beyond excited to return to one of my favourite countries with a high-energy show and new music to share with my Canadian fans. It’s going to be an amazing time!”

A philanthropist, author, TV and film star, Carter’s enduring career has spanned beyond the stages of sold out arenas. Highlights include his VH1 reality series I Heart Nick Carter, a 2nd place standing on international juggernaut Dancing with the Stars, and a starring role in horror film The Hollow.