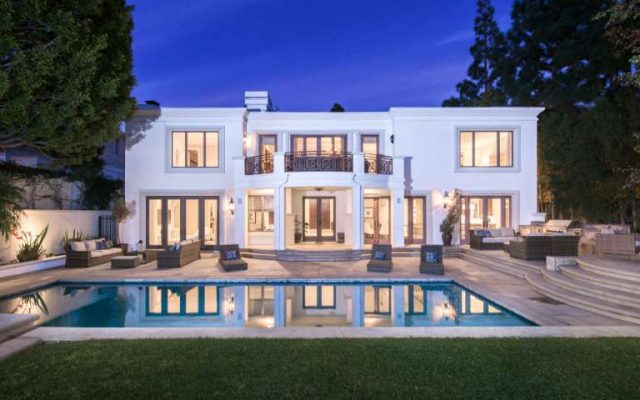 Long before COVID-19 forced late-night television hosts to abandon the studios and retreat to their homes where today’s shows are filmed, The Tonight Show Starring Johnny Carson ruled late-night TV for 30 years. And for most people, the words “talk show” conjured mental images of the opening of The Tonight Show with “Hereeeees Johnny” belted out by announcer-and-sidekick Ed McMahon. It was McMahon who opened the show 6,395 times with average viewership about three times more than today’s night-talk shows, more TV viewers than Jimmy Fallon, Jimmy Kimmel and Steven Colbert combined. When Carson moved the show from New York City to Burbank, California in 1972, McMahon eventually bought a Tudor-style mansion in Beverly Hills. It is where he lived for 20 years until his death in 2009 at age 86, now on the market priced at $6.795 million.

Built in 1989 and sited on a third of an acre in the gated Summit community in Beverly Hills, the home measures 7,013 square feet with six bedrooms and seven baths. Only a stone’s throw to the studios, the Summit neighborhood has always attracted entertainment celebrities such as Gwen Stephani and Britney Spears. It was perfect for McMahon for his daily commute to The Tonight Show in Burbank. As with all the mansions in the private and secure enclave, the rooms are large with the formal rooms spilling out onto the pool terrace giving good flow for entertaining. Inside is a sky-lit, two-story foyer with wrought-iron banister leading to the upper level that has an overlook. There are living and family rooms, both with fireplaces, formal dining room, an eat-in chef’s kitchen with island and outdoor access through French doors, a wet bar, spa, office and a gym. The large master suite has a seating area and opens onto its own private balcony overlooking the grounds. The outdoor entertaining area has a pool, firepit and a lush lawn privately shielded with mature hedging on both sides.

With ailing health, financial woes from bad investments, and the Great Recession’s horrendous housing market, Ed almost lost the home in 2008. Several of his friends, including Donald Trump, vowed to save the home for McMahon. However, McMahon ended up selling it to a family friend who rented it back to Ed until his death in 2009.

The Beverly Hills home of Ed McMahon is now on the market. Priced at $6.795 million, it is listed by Stephen Apelian and Joyce Rey of Coldwell Banker International Realty, Beverly Hills.